The Ba-Ronga map of H.-A. Junod and the text below are reproduced with the kind permission of the author Mr Serge Reubi and the "Revue Historique Neuchâteloise" No 4 - 2004 and extracts from the excellent article "Helping Africa and Serve Science: Henri Alexandre Junod, Missionary and Ethnographer (1863-1934) "

Henri-Alexandre Junod was born on May 17, 1863 into a family of Neuchâtel pastors. Despite a strong interest in the natural sciences during his schooling, he decided to continue the family tradition and entered theology faculty in 1881. At the end of his studies, during which he spent a semester in Basel and another in Berlin, he was admitted to the Mission Suisse Romande in 1886.

In 1887, he was sent to Edinburgh to receive basic training in medicine and surgery. This stay is undoubtedly essential in the education of the young Junod, because he did not become familiar only with medicine. He seems to have met Henry Callaway, a former bishop of Natal, who is then famous for his research on the Zulus and whose scientific background illuminates somehow that of Junod. Callaway began working on the Zulu language, with the intention of translating the Bible into the local idiom, before its interest lost its only proselytizing dimension.

It was then that Callaway devoted himself to the study of the Zulus from an anthropological perspective. For Callaway, in fact, mastery of the language is necessary to fully understand the natives, in order to correctly grasp what they say (FRIESEN: 38): from an aim in itself, linguistic analysis becomes a means of understanding the natives. More generally, Callaway's interest shifted from language to Zulu oral literature - he published a book about it in 1866 - and, ultimately, to the study of more strictly anthropological problems. If it is true that a meeting of the two men is not formally established, the influence of the first on the second is undeniable.

Following his stay in Scotland, Junod settled for a year in Neuchâtel before being sent to the Portuguese possessions of South-East Africa, in Lourenço Marques (now Mozambique), where the Mission Suisse Romande is present.

On the spot, his work of evangelization and his teaching at the Mission prove to be ideal occasions for observing and studying the country Ba-Ronga and its inhabitants. As a good missionary and for the purpose of proselytism, it is their language that interests him first. His goal is first, like Callaway, to translate the Bible. This work of translation, as well as his contact with the students of the Mission finally allow him to quickly master the language, so that in 1896 a ba-ronga grammar could be published. But, like Callaway, his study of the language allows him to broaden his interest in songs and tales, which he collects at school, then to a monograph of the Ba-Ronga.

Alongside this influence, Junod's work is also the fruit of a conversation with Lord Bryce in 1895, which he reports in the introduction to The Life of a South African Tribe. This British politician, having traveled extensively throughout the Empire, became aware of the poverty of Western knowledge about natives in general and South Africa in particular. He then urges the Europeans who live on the spot to undertake the scientific study of their primitive life (...)

(...) In the first place, it is therefore the concern to record the Ba-Ronga's primitive way of life in order to keep a trace of it after their traditions have completely disappeared and been replaced by "the great level of our civilization" (JUNOD 1898: 8) which animates the missionary. But Junod, in the evolutionist tradition, also makes from his knowledge on the Ba-Ronga (of his time) a way to understand European prehistory:

"These primitive peoples have probably arrived at a degree of development by which we ourselves once passed. I imagine that the Lacustres of the Stone Age were hardly superior to the Bantu peoples. In some respects they were even inferior to them. It seems, therefore, when we bend over these primitives to decipher their conception of the world and of life, that our ancient history, to us, arises before our eyes. Certain problems of our civilized souls, girls enlarged by these primitive souls, are explained. We are becoming more aware of ourselves and the mysteries of our evolution" (JUNOD 1898: 8).

Junod collected information about the Ba-Ronga while continuing his work at the Mission until he returned to Switzerland the following year, in 1896.

It is in Neuchâtel that he continued to harvest the fruits of his first stay. As I have already mentioned, in 1897, in line with Callaway's work, he made use of the large quantity of native stories he recorded to write a collection of Ba-ronga songs and tales, and in 1898, he published a comprehensive monograph on Ba-Ronga. It constitutes the third and last part of his trilogy devoted to this population, a trilogy that he began with grammar and continued with the analysis of songs.

This work, which is his first major ethnographic research and to which he owes a celebrity to the metropolis, at the same time seals the culmination of his studies in this field. From now on, he will limit himself to increase, to complete and to precise his data, but will not change more fundamentally his plan of research. Certainly, he modifies his interrogations so that his data answer better to the state of the research, but, on the whole, everything is there.

This sudden celebrity and the recognition he enjoys, however, do not change his priorities. Ethnography may have supplanted entomology, but it is still only a "hobby", as he puts it, and he remains primarily a missionary. Thus, it is not altogether surprising that Junod returns to Africa the following year as soon as the Mission appoints him director of a school in Shiluvane, in present-day Mozambique.

On the spot, he continued to mix his missionary work and the collection of ethnographic data until his return to Switzerland in 1909. It was then, as he had done after his first trip, that he drew up his field data and works at The Life of a South African Tribe, which is actually a second English edition widely revised and supplemented by his Ba-Ronga. This work, which is considered his "great work", was published in 1911 and 1912 and was a resounding success, earning him the honorary membership of the prestigious Royal Anthropological Institute.

Junod then saw the summit of his ethnographic glory. It is indeed at the same time that he occupies his only official functions in the discipline in Neuchâtel. In 1910, the Faculty of Arts solicited him for an ethnography course he gave in 1911, financed by the Neuchâtel Society of Geography; the following year he was appointed to the commission of the Ethnographic Museum. However, a new departure for Africa with the Mission forced him to resign in 1913. He remained in Shiluvane until 1920.

As in his previous trips, he took advantage of his missionary activity to gather new information, which he intended for a new edition of The Life. As he is now accustomed to, it is upon his return to Switzerland that he analyzed his data while continuing his work for the Mission. In fact, the 1920s will be, for Junod, mainly devoted to the Mission and its work at the League of Nations on behalf of the International Bureau for the Defense of the Indians (H.-P. JUNOD 1936: 63-70).

Nevertheless, he did not completely abandon his scientific activity: first, he wrote some articles in the specialized journals with which he collaborated (Man, Folklore, Anthropos, Africa, Bulletin of the Neuchâtel Society of Geography). He was thus in close contact with the main players in the discipline, such as Lucien Lévy-Bruhi, and caught up in scientific controversies (STOCKING: 335-7). In addition, he taught various courses at the Universities of Lausanne, Geneva and London, some of which related to his study of the Ba-Ronga.

He finally published a second edition of The Life, largely augmented by the documentation assembled between 1913 and 1920. But this was his last big job. Thereafter, his vacillating health allowed him to produce only a few works until his death in Geneva in 1934.

His life has thus been a constant balance, both geographically, between his field work in Africa, the writing of work in Switzerland and his professional activities, between his life as a missionary and ethnographer. If it is obvious that his homeland was Africa - he asked to be buried in Rikatla - it seems clear that he was also more missionary than scholarly. 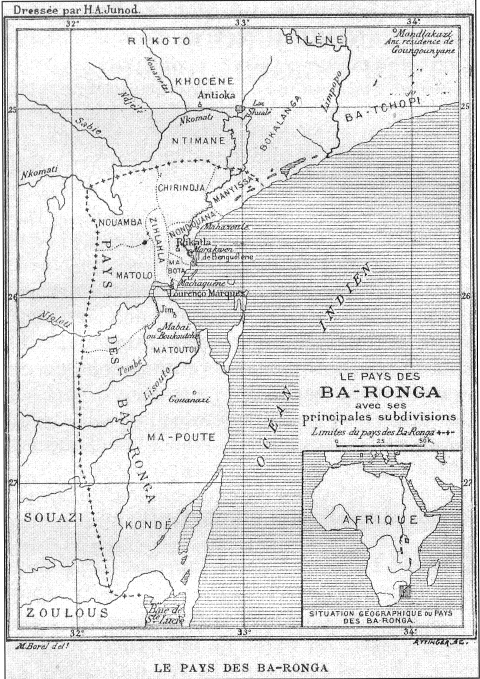