The amazing discoveries of a DNA analysis for genealogical purposes 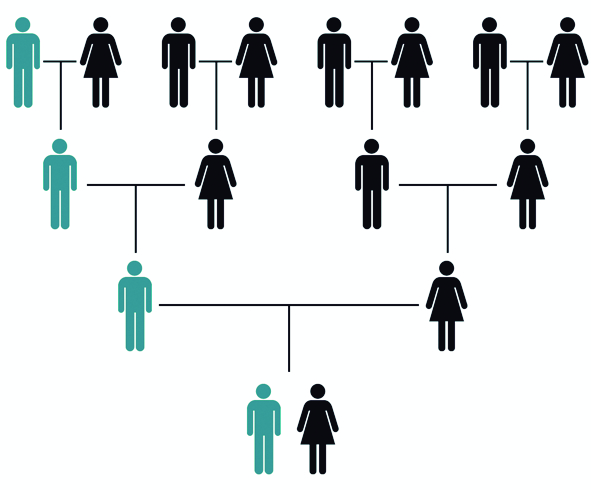 The purpose of the primary DNA test is to determine whether 2 people who are initially assumed to be unrelated actually have a common (paternal) ancestor. The purpose of these tests is to help reconstruct lost family ties.

Our discoveries are the result of DNA tests carried out by Family Tree DNA(1) with the help of several members of the Junod, Cellier, Chiffelle and Schiffley families as well as the documentary research carried out on Internet as well as the archives of Bern, Nods and of La Neuveville, by the Prof. ETHZ François Cellier, Alfred Cellier and Nicolas Junod.

All of our cells are diploid except for the female egg cells and the male sperm cells, which are haploid.  These, the so-called gametes, are produced from diploid cells in two steps of meiosis. In this process, genetic material from the two chromosomes that form a pair may get recombined creating new chromosomes that contain genetic information from two grandparents.

When a sperm merges with an egg, i.e., when the egg is being fertilized, the genetic information contained in the egg and that in the sperm are being combined, and a new diploid egg cell, the so-called zygote, is being formed.

Links between Junod, the Chiffelle and Cellier

My ancestors Junod, from Lignières, are attested in this town since the 16th century by Gerard Junod (around 1530 - before 1600), husband of Marie Gicot and, later, Esther Yerle. My research on this family began in 1993.

My participation since 2007 in a genealogical research program based on DNA analysis, marked a major turning point in my research in 2012, having established - with cross-references of existing written documents - that the ancestors of JUNOD Lignières come from the neighbouring village of Nods (Bern), as the CELLIER families (now from La Neuveville) and families CHIFFELLE (Tschiffely or Tschiffeli in German), now from Lignières and Neuveville.

The most astonishing was to discover the common thread of these three families with distinct surnames: they all come from the same paternal ancestor, by name change - not adulterous.

Towards the end of the 14th century, the first separation of surnames by the children of the couple Jean CHIFFELLE-DIT JUNOD (born around 1360), son of Jehan TSCHIFFELI and his wife JUNOD: a part extends under the surname CHIFFELLE, the other under that of JUNOD.

The grandfather of this CHIFFELLE ally JUNOD, Hans TSCHIFFELY and his wife Katharina VON RONSENEGG, settle in Nods at the beginning of the 14th century, coming from Sursee (LU).

A genealogical research dating from 1608 evoked by Dr. Paul de Quervain(2) states that TSCHIFFELY Sursee emigrated from southern Italy in the 13th century: CIPELLI or CIFELLI, CIPHELLI from the Neapolitan region would be the ancestors TSCHIFFELY and thus CHIFFELLE, SCHIFFLEY, JUNOD and CELLIER.

At the beginning of the 16th century, we find a new separation of surname with the children of a descendant of the couple Jehan Tschiffeli and "N." Junod: "Jehan Junod-dit-Seyllier" (or Sallier) of Nods who adopt, for some the surname of CELLIER and for others, that of JUNOD.

Another peculiarity resulting from the DNA results: of the 111 alleles analyzed (variable version of the same gene or the same genetic locus), the one identified under "DYS19" indicates for our extended "clan" an extremely repetitive and rare value(3) of 9 or less (while most people tested here show a value around 13 or 14): only 27 of the hundreds of thousands of people tested indicate such a low value - which remains to this day still a mystery.

We are looking for male descendants bearing the name CIPELLI, CIFELLI or CIPHELLI who would accept to take a DNA test (simple and anonymous). Thanks to contact me.