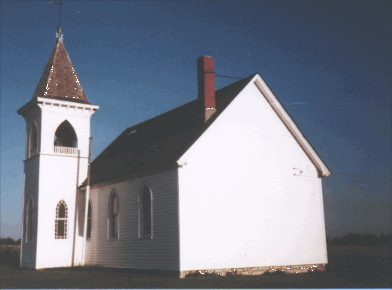 Witnesseth, that said parties of the first part, in consideration of the sum of One DOLLARS ....., the receipt whereof is hereby acknowledged do... by these presents grant, bargain, sell and convey, unto said parties of the second part, their succession office and the following described Real Estate, situated in the County of Nemaha and State of Kansas :

To have and to hold the Same, Together with all and singular tenements, hereditaments and appurtenances thereunto belonging or in anywise appertaining, forever.

And said Charles A. Bonjour, Newton Dodds and Joseph Lefebre for themselves and their successors in office, do hereby covenant, promise and agree, to and with said parties of the second part, that at the delivery of these presents they are lawfully seized, in their own right, of an absolute and indefeasible estate of inheritance, in fee simple, of and in all and singular the above granted and described premises, with the appurtenances; that the same are free, clear, discharged and unincumbered of and from all former and other grants, titles, charges, estates, judgements, taxes, assessments and incumbrances, of what nature or kind soever; and that they will warrant and forever defend the same unto said parties of the second part, their successors in office and all and every person or persons whomsoever, lawfully claiming or to claim the same.

In Witness thereof, the said parties of the first part have hereunto set their hands, the day and year first above written.